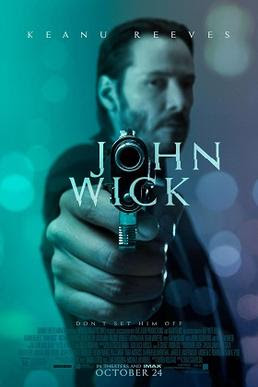 First things first, this movie is worthy of every penny as well as time you spend on it.

Keanu Reeves plays ex-assassin John Wick, who is a recent widower. While grieving over his wife's demise, he gets one last gift from her so that it can help him cope up, the gift is indeed a puppy. A normal face/off over the vintage 1969 Mustang at a gas station with a wannabe thug gets out of line too soon. The wannabe thug & his thug-friends intrude into John Wick's house, beats him up, stoles his car but in between kills the puppy. They had to kill Wick's puppy. Anyways, now Wick wants revenge & how he gets it in style forms the entire film.

The moment the movie starts we are driven into the world of John Wick. It opens with the climax scene followed by the narration of 90 odd minutes taking us through all the events that led to the climax scene. John Wick has just lost his wife due to a terminal illness, he had quit his past to be with her while dreaming of a perfect life with his loved one. It doesn't go as he wished, her sudden demise shatters him. He had abandoned his past just for her & now he had nothing to live for in the present. Completely lost, he gets one last gift from his loving wife, a posthumous gift which happens to be a cute puppy. It comes with a letter for sure but his wife clarifies that the letter doesn't count as this is no P.S. I Love You. He starts getting closer to the puppy eventually named Daisy. He takes the puppy on a ride in his 1969 Mustang, while he's filling up the gas he comes across 3 thugs who asks him whether the Mustang is for sale. In their words, "Every Bitch has a price". Wick calmly replies "Not his bitch". Soon, these thugs intrude his house, kills the puppy & leaves him bleeding.

Wick buries his puppy, and digs up his buried past life. He's on vengeance. The so-called thugs soon realize whom they're messing with. Russian Mob boss Viggo, the father of one of the thug Iosef, who previously had Wick working for him know what he's capable of as he refers to him as The Boogeyman who takes the children who don't behave properly. At some point he also refers Wick to someone you send to kill the Boogeyman, but well that kinda writing glitches are pardonable. So in a desperate attempt to save his son he announces a open contract of $2 million which any paid assassin would be willing to take upon. Meanwhile, a few attack Wick at his home where he kills everyone of them. In between, a cop knocks on the door, only to witness the dead bodies, seeing Wick he just walks away. Then Wick calls upon an unique waste management service who actually does the cleaning up of dead bodies & any sort of blood mark on the floor. - who am I kidding, that was freaking awesome.

Now Iosef is on the hide, by hide it really means he's partying at the club basement with a lot of bikini clad girls. The whole club is protected. Wick enters it in style, with loads & loads of gunshots, bullet to the heads, broken necks, brutal fights.. well that's exactly what we paid to see isn't it? There's Willem Dafoe playing Marcus who is also a paid assassin, someone who is in good terms with John Wick. Viggo asks him to take care of Wick for him, $2 million is a big amount to take up such a target. Now that, Wick is an open target, with several assassins trying to kill him in order to win that price put on his head.. Wick moves on as focused he is in reaching his target.

Keanu Reeves nails it. He plays the emotional sequences as per the requirement of the character but when it comes to action, he's on a roll. Not an exaggeration, it's his best after Speed, of course excluding The Matrix. Michael Nyqvist is very good in the role of Viggo. Willem Dafoe is first rate. John Leguizamo is there for only one scene. Adrienne Palicki plays her part efficiently. Alfie Allen acts dumb at the beginning & scared for the rest of the film as required by his character.

Well the script isn't path breaking by any means. It's just a revenge tale which has been done to death. What makes the film stand apart is the direction by David Leitch & Chad Stahelski. They don't waste a single minute to get on with the story & once the action kicks in, it's one hell of a ride. There're no subplots to deviate the movie or act as disturbance.

Final Word for the movie - It's Taken, only this time it's a puppy.
Posted by suhas chand at 4:58 AM